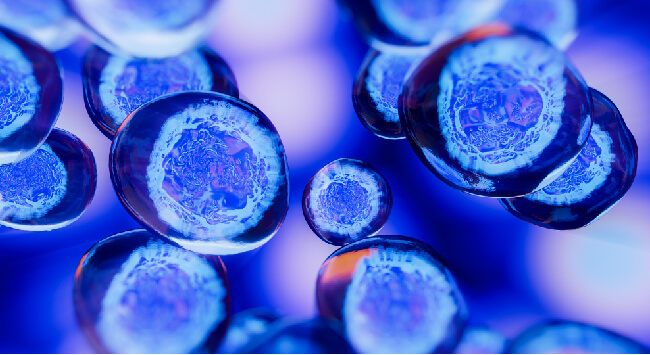 The 3-dimensional structure of chromatin and its spatial organization within the nucleus function synergistically to establish cell-type specific nuclear architecture and in turn, govern gene expression. Significant research effort has gone into understanding the epigenetic mechanisms that shape nuclear architecture and the role of 3-D genome organization in transcriptional regulation.

New research from the lab of Asifa Akhtar at the Max Planck Institute of Immunobiology and Epigenetics describes an interconnected web of regulation, showing that lamin A/C acetylation is critical for nuclear lamina integrity and thus plays a role in regulating chromatin structure, nuclear organization, and gene expression.

Organization of the Genome Within the Nucleus

Understanding the organization of chromatin within the nucleus is important because genome organization is a part of the regulatory network that contributes to proper levels of gene expression in different cells and tissues. Genome organization goes beyond the linear DNA sequence and involves the interactions between chromosomal domains, sometimes long-range interactions, that are mediated by post-translational modifications of histones and other factors. Recent advances in chromatin conformation capture techniques and genome mapping have revealed a wide variety of higher-order chromatin structures.

Chromatin generally occupies one of two states in the nucleus: tightly packed and condensed with low transcriptional activity (heterochromatin), or open, accessible and transcriptionally active (euchromatin). Chromatin states can be further regulated by being organized into progressively more complex higher-order structures, the simplest of which are chromatin loops.

Chromatin loops are formed by the joining of DNA sites in 3-dimensional space that are far apart in the linear DNA sequence, causing the intervening sequence to loop out. These structures are generally formed by extrusion at the cohesion complex and are bounded by the insulator protein CTCF. Chromatin loops function to bring distal promoters, enhancers/repressors, and target genes into close physical proximity within the nucleus (Kadauke & Blobel, 2009).

On a larger scale, chromatin interacts in regions referred to as topologically associating domains (TADs). TADs are genomic regions that preferentially associate with each other within the nucleus and can range in size from thousands to millions of base pairs. TAD boundaries are also enriched for CTCF. Adding another layer of organization, transcriptionally active TADs self-associate (termed compartment A), while inactive TADs form a second compartment (compartment B). Finally, each of the individual interphase chromosomes occupies a distinct spatial “territory”, meaning that chromatin from different chromosomes rarely interacts (Bonev & Cavalli, 2016).

Check out our interview with genome organization expert Wendy Bickmore to learn more about TADs and her research on spatial organization of the human genome.

In general gene-dense, heavily transcribed regions tend to be closer to the center of the nucleus, whereas gene-sparse or repressed regions are closer to the nuclear envelope (Pombo & Dillon, 2015). Chromatin at the nuclear envelope can directly contact the nuclear lamina. These regions are called lamina-associated domains (LADs) and tend to be enriched for markers of heterochromatin and transcriptional repression. Chromatin in LADs has been shown to interact specifically with the lamin proteins, a family of intermediate type V filaments comprised of lamin B, and lamins A and C. The lamins give the nuclear envelope structure and rigidity, and also have a role in transcription, and DNA replication and repair (van Steensel & Belmont, 2017).

Want to learn more? Check out our article on the link between chromosome topology and regulation of gene expression.

What is the NSL Complex and What Does it Do?

The non-specific lethal (NSL) complex is a protein complex consisting of several essential proteins that work together to regulate gene expression, primarily on autosomes. One specific component of the NSL complex is MOF (which stands for males absent on the first), which is notable for its acetyltransferase activity, particularly on chromatin on histone 4 at lysine 16 (H4K16Ac).

The NSL complex is composed of nine distinct proteins. As mentioned previously, the protein responsible for the complex’s acetyltransferase activity is the MOF protein (also called KAT8), which is also a component of the closely related male-specific lethal (MSL) complex. Additional proteins in the NSL complex that are required for acetyltransferase activity are KANSL1, KANSL2, and KANSL3, which are thought to act as scaffolds to stabilize the complex. Another component, the PHF20 subunit, acts as the recruitment factor to bring the NSL complex to active promoters. The remaining complex members are shared with various other pathways and protein complexes and include MCRS1, WDR5, OGT, and HCF1 (Sheikh, Guhathakurta & Akhtar, 2019).

Check out our interview with Professor Asifa Akhtar to learn more about the NSL complex, MOF, and other related mechanisms.

The H4K16Ac modification is known to decompress chromatin, making it more open and accessible to transcription factors and other proteins, and thus alters gene expression. Therefore, the NSL complex influences a wide variety of genetic pathways, including those involved in normal development and cellular homeostasis. The NSL complex is found at the promoters of many constitutively active housekeeping genes, and these promoters are enriched for other epigenetic modifications associated with transcriptionally active chromatin. The NSL complex also interacts with other chromatin modifiers and transcription factors, allowing for crosstalk of many regulatory pathways. Dysregulation of the NSL complex has been implicated in several malignancies and developmental disorders, further underscoring the importance of this complex in biology.

The Role of the NSL Complex in Lamin A/C Acetylation

The Akhtar lab set out to better understand the role of the NSL complex in the regulation of gene expression. They investigated how NSL-induced epigenetic changes affect nuclear architecture and gene regulation (Karoutas et al., 2019). They generated mouse knockout (KO) cell lines with the Mof, Kansl2, or Kasnl3 genes knocked out. Loss of any of these three NSL complex subunits resulted in abnormal nuclear morphology, such as membrane blebbing and the formation of micronuclei.

Compared to the normal nucleus, nuclei with abnormalities had differentially distributed lamin proteins, decreased nuclear pore components, and increased DNA damage. Blebbing was particularly prevalent during interphase, and loss of Mof or Kansl2 was associated with an increased risk of nuclear envelope rupture during interphase (NERDI). These effects revealed a previously unknown role for the NSL complex in the maintenance of nuclear integrity.

The team next set out to elucidate the mechanism by which the MOF-NSL complex affects nuclear membrane integrity. Given that MOF is an acetyltransferase, potential MOF targets were identified by looking at the acetylome of Mof knockout cells. Lamin A/C was identified as a potentially impactful MOF target based on a significant decrease in acetylation in conjunction with its role in nuclear membrane structure. Several lamin A/C mutants were made to mimic loss of acetylation at key residues (K97R, K108R, and K311R). These mutations phenocopied the Mof and Kansl2 knockouts when introduced into cells, establishing lamin A/C as a bona fide and novel target of the MOF-NSL complex.

While disruptions to the nuclear lamina structure demonstrably impact the nuclear envelope, they have also been reported to affect genomic DNA stability. Accordingly, about 25% of both Mof KO cells and cells expressing the non-acetylated lamin mutant K311R showed evidence of at least one copy-number alteration (CNA). A subset of these displayed multiple CNAs, some with multiple CNAs on a single chromosome. In-depth sequencing of a cell with multiple CNAs revealed signs of chromothripsis, which is a catastrophic shattering and rejoining of a chromosome that results in thousands of rearrangements. Chromothripsis is known to be associated with micronuclei. Likewise, the lamin K311R mutant cells showed evidence of intra-chromosomal rearrangements, similar to what is observed in oncogenic genomic events.

The loss of lamin A/C acetylation also resulted in significant changes to the epigenetic landscape within the nuclear abnormalities. The micronuclei and blebs of Mof KO and Kansl2 KO cells, as well as cells expressing lamin A K311R, were enriched for epigenetic modifications associated with heterochromatin and depleted for euchromatic modifications while the main nuclei were unaffected. The researchers referred to this phenomenon as “heterochromatin enrichment in nuclear abnormalities” or HENA.

Live cell imaging of Mof KO cells showed that HENA accumulates during interphase, marked by an increase in bleb-localized H3K27me3 (a marker of heterochromatin and transcriptional repression). In conjunction with an observed decrease in RNA output, these results indicate HENA-induced transcriptional silencing occurred within nuclear abnormalities.

Finally, the team of scientists sought to uncover changes to lamin A/C dynamics caused by the loss of NSL-dependent acetylation. Loss of lamin A/C acetylation was found to increase lamin diffusion rates and cause an increase in chromatin-bound soluble lamin A/C during interphase.

What’s Next for Nuclear Lamina and Nuclear Architecture Research

The recent work from researchers in Asifa Akhtar’s lab and collaborators complete another piece of the nuclear organization puzzle, unveiling how the MOF-NSL complex connects the epigenetic landscape, gene expression, and nuclear architecture. As various members of the NSL complex have been implicated in a set of degenerative disorders known as “laminopathies,” including the lamin K311R mutation highlighted here, future work may be focused on a better understanding of the pathogenic mechanisms of the MOF-NSL complex, as well as therapeutic efforts towards the management of these diseases.

As we begin to more accurately map the 3-dimensional genome, we must also work to understand how these structures and organizational systems are shaped and regulated. Long non-coding RNAs (lncRNAs) have been demonstrated to interact with chromatin and can influence chromatin architecture via additional associations with chromatin-modulating proteins or by blocking chromatin modifications at these sites. Long non-coding RNAs can also affect genome organization via their role in modulation of nuclear domains (Sun, Hao & Prasanth, 2018). Additional research investigating how lncRNAs ultimately regulate chromatin structure and gene expression will be interesting to follow.

To better understand cell-type-specific chromatin structures, spatial genome organization, and long-range chromatin interactions, there is an ongoing effort to develop cell-type specific nuclear architecture maps. The 4D Nucleome Project aims to map these cellular features and relate them to gene expression and other biological activities. Ultimately, this project and other efforts in nuclear architecture research will broaden our understanding of DNA and gene expression, moving us far beyond our original linear view.