This Pht1 / H2AZ acetyl antibody was raised against a peptide containing acetyl-lysine at positions 5, 7, 12 and 16 from the amino terminus of Pht1, the histone H2AZ variant in S. pombe. 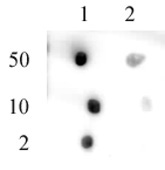 Pht1 is the S. pombe homolog of histone H2AZ and is involved in transcriptional regulation and chromosome architecture. It is also implicated in suppressing the accumulation of anti-sense transcripts through interaction with RNAi machinery and heterochromatin proteins.

Whole-cell extracts from S. pombe can be used as a positive control for Pht1 / H2AZ acetyl antibody.