*Note: many chromatin-bound proteins are not soluble in a low salt nuclear extract and fractionate to the pellet. Therefore, we recommend a High Salt / Sonication Protocol when preparing nuclear extracts for Western blot.

This antibody was raised against a peptide including acetyl-lysine 15 of human histone H2B. 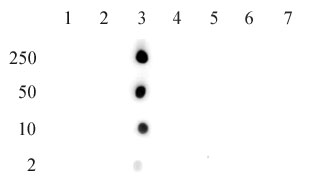 Histone H2B is one of the core components of the nucleosome. The nucleosome is the smallest subunit of chromatin and consists of 147 base pairs of DNA wrapped around an octamer of core histone proteins (two each of Histone H2A, Histone H2B, Histone H3 and Histone H4). Histone H1 is a linker histone, present at the interface between the nucleosome core and DNA entry/exit points; it is responsible for establishing higher-order chromatin structure. Chromatin is subject to a variety of chemical modifications, including post-translational modifications of the histone proteins and the methylation of cytosine residues in the DNA. Reported histone modifications include acetylation, methylation, phosphorylation, ubiquitylation, glycosylation, ADP-ribosylation, carbonylation and SUMOylation; they play a major role in regulating gene expression. Acetylation of Lys15 is a histone onco-modification candidate as it has been found to be a property of non-dying cells.

Active Motif's HeLa nuclear extract (Catalog No. 36010) can be used as a positive control for Histone H2BK15ac antibody.