DNA methylation is an important regulator of gene expression and genomic organization. CpG methylation of gene promoters is associated with transcriptional silencing. Alterations in normal DNA methylation patterns, either local increases that result in silencing of specific cell cycle regulatory genes, or a global reduction in DNA methylation, are both involved in many different types of cancer.

CpG methylation involves the transfer of a methyl group to position 5 on the cytosine (5-methylcytosine, or 5-mC) base in a CpG dinucleotide by the action of DNA methyltransferase enzymes (DNMTs). A novel form of DNA methylation,
5-hydroxymethylcytosine (5-hmC) methylation, results from the enzymatic conversion of 5-mC into 5-hmC by the TET family of cytidine oxygenases (Figure 1). This form of methylation is prevalent in neurons and embryonic stem cells (Figure 2). While the role of 5-hmC methylation is unknown, it may represent a pathway by which 5-mC methylated DNA is converted to an unmethylated state.

Figure 1: Schematic of conversion of 5-mC to 5-hmC. 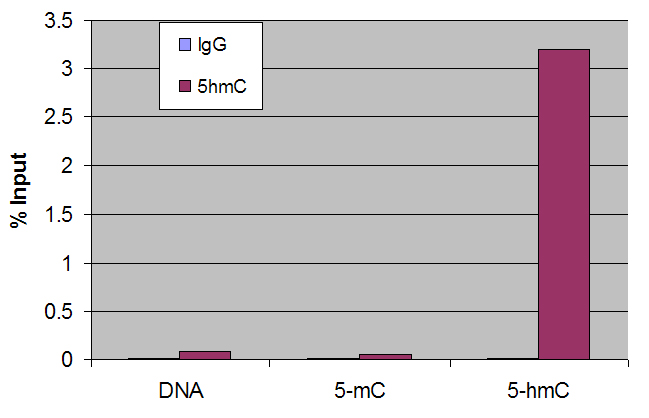 For information on 5-hydroxymethylcytosine DNA methylation services, including hMeDIP-chip and hMeDIP-Seq, visit our Custom Services page.

Download our flyer to learn more about Active Motif’s products and services to study DNA methylation.