Jump to your topic of interest:

5-methylcytosine was the first DNA methylation variant discovered and is the most abundant modified DNA base – it is also the most widely studied form of DNA methylation. 5-mC generally occurs on cytosine bases that are followed by guanines, which are referred to as “CpGs”, although non-CpG methylation has been identified in embryonic stem cells2.

The mechanism of 5-methylcytosine involves the transfer of a methyl group from S-adenosyl methionine (also known as AdoMet or SAM) to the carbon 5 position of a cytosine residue. This transfer is catalyzed by DNA methyltransferase enzymes (DNMTs)1.

Active Motif offers a variety of DNA methylation-specific antibodies and assays designed to aid researchers in the analysis of 5-methylcytosine DNA methylation.

A feature of various human diseases including cancer is genome-wide alterations in DNA methylation content. For researchers interested in assaying global DNA methylation, Active Motif's Global DNA Methylation Assay – LINE-1 is a convenient ELISA-based assay for the detection and quantification of global 5-mC levels in human genomic DNA. The 96-well assay utilizes a unique hybridization approach that quantitates 5-mC levels of Long Interspersed Nucleotide Element 1 (LINE-1) repeats as a surrogate measure for global DNA methylation. This hybridization approach offers better specificity and reproducibility than methods that use passive adsorption for DNA capture. The assay is ideally suited for screening relative changes in 5-mC levels across multiple samples resulting from variables such as treatment conditions, patient history and clinical prognosis.

For enrichment of methylated DNA fragments containing 5-methylcytosine, Active Motif offers the antibody-based MeDIP Assay in which an antibody specific for 5-methylcytosine is used to bind and immunoprecipitate methylated DNA fragments. This reduces sample complexity, leaving you with DNA specifically enriched for 5-mC. An alternative non-antibody-based method for enrichment that uses methyl-CpG binding proteins (MBD) to specifically bind DNA fragments containing 5-methylcytosine within a CpG dinucleotide. Active Motif's MethylCollector™ Ultra Kit uses a combination of MBD2b and MBD3L1 to enhance the binding and enrichment of 5-mC DNA.

Bisulfite conversion is a process in which genomic DNA is treated with sodium bisulfite, leading to deamination of unmethylated cytosines into uracils, while methylated cytosines (both 5-methylcytosine and 5-hydroxymethylcytosine) are protected from deamination and remain unchanged. The DNA is then amplified by PCR and the uracils are converted to thymines during the DNA polymerization. This process allows for single-base resolution of DNA methylation and many researchers therefore consider it the gold standard for 5’mC analysis.

Bisulfite-converted DNA can be analyzed for gene-or allele-specific methylation patterns by amplification with primers that differentiate between methylated and unmethylated (converted) sequences, or by performing Sanger sequencing of the amplified regions. There are also several genome-wide DNA methylation assays, such as reduced representation bisulfite sequencing (RRBS) and whole genome bisulfite sequencing (WGBS).

Researchers interested in studying the DNA methyltransferase enzymes, DNMT1, DNMT3a and DNMT3b, that are responsible for transferring the methyl group to the fifth carbon of cytosine to produce 5-methylcytosine should use the DNMT Activity / Inhibition Assay. This non-radioactive assay can screen DNMT enzymes or nuclear extract samples for their ability to methylate the oligonucleotide substrate coated on the wells of a 96-well plate. The colorimetric assay is easily quantified by spectrophotometry and is ideally suited to screen for inhibitors of DNMTs or to evaluate changes in the DNMT activity across samples.

If you are simply looking for positive controls to assist in validating your research, Active Motif offers both a Methylated DNA Standard Kit and Fully Methylated Jurkat DNA. The Fully Methylated Jurkat DNA has been enzymatically treated to ensure 5-methylcytosine DNA methylation of all CpG dinucleotides. This methylated DNA serves as an excellent control for our MethylCollector™ Ultra assay, or any experiment involving the analysis of CpG methylation.

The Methylated DNA Standard Kit is composed of three different DNA standards: unmethylated standard, 5-methylcytosine standard and 5-hydroxymethylcytosine standard. The kit contains all three DNAs and corresponding sequence-specific PCR primers to analyze each DNA modification individually. These controls can be used for dot blot analysis or as spiked controls in enrichment experiments.

DNA Methylation Assays Done for You with Custom Epigenetic Services

For more complex analysis of 5-methylcytosine DNA methylation that may surpass the capabilities of your research laboratory, or the availability of resources with the required level of skill and expertise in this area, Active Motif also offers Epigenetic Services for the analysis of 5-methylcytosine. Available services include MeDIP-Seq and bisulfite conversion, to name a few. Check our complete line of Epigenetic Services for DNA methylation anaylsis for more information.

5-Hydroxymethylcytosine is a DNA methylation modification that occurs as a result of enzymatic oxidation of 5-methylcytosine (5-mC) by the Ten-eleven translocation (Tet) family of iron-dependent deoxygenases3. 5-Hydroxymethylcytosine can be found in elevated amounts in certain mammalian tissues, such as mouse Purkinje cells and granule neurons6. Alternatively, 5-hmC may be produced by the addition of formaldehyde to DNA cytosines by DNMT proteins7.

While a variety of techniques exist to study DNA methylation, most of these techniques were developed to distinguish 5-methylcytosine from unmodified cytosine. Evaluations of these methods in the context of 5-hydroxymethylcytosine reveal that many are not suited for the analysis of 5-hmC. Bisulfite sequencing, for example, cannot distinguish between 5-mC and 5-hmC, just as methyl-binding protein methods like methylated CpG island recovery assay (MIRA) will only recognize 5-mC in DNA8. To better understand the function of 5-hydroxymethylcytosine in the mammalian genome, new tools and techniques need to be employed.

The use of methylation-sensitive restriction enzymes is another way to discriminate between 5-hmC and 5-mC. To date, there is only one enzyme, the PvuRts1 I restriction enzyme, capable of directly differentiating these two forms of DNA methylation. The PvuRts1 I enzyme is specific to 5-hmC DNA and will not digest 5-methylcytosine residues or unmethylated DNA11.

Another way to distinguish 5-mC and 5-hmC methylation is targeted modification of the 5-hydroxymethylcytosine residue. For this purpose, the β-Glucosyltransferase enzyme is able to transfer a glucose moiety from uridine diphosphoglucose (UDP-Glucose) to the 5-hydroxymethylcytosine residue in double-stranded DNA, creating glucosyl-5-hmC DNA. Glucosylated DNA can be quantified or used to differentiate 5-hmC and 5-mC DNA using glucosyl-sensitive restriction enzymes9.

Locating 5-hmC in the Genome

Custom Epigenetic Services Take the Learning Out of Hydroxymethylation Analysis 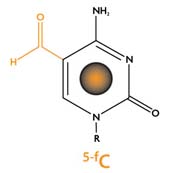 More recent publications over the past decade have demonstrated that 5-formylcytosine is a DNA methylation variant produced when Tet enzymes act on 5-hydroxymethylcytosine4,5. Further oxidation of 5-formylcytosine by the Tet enzyme will results in conversion to 5-carboxylcytosine. It is believed that the oxidation of 5-methylcytosine through the various DNA methylation variants represents a mechanism of DNA demethylation, and that the intermediate products like 5-fC in this demethylation pathway have biological functions during development and germ cell programming.

5-formylcytosine is present in mouse embryonic stem (ES) cells and major mouse organs4. This DNA modification also appears in the paternal pronucleus post-fertilization, concomitant with the disappearance of 5-methylcytosine, suggesting its involvement in the DNA demethylation process12. To help researchers elucidate the function of 5-formylcytosine, Active Motif offers antibodies for the study of 5-fC. 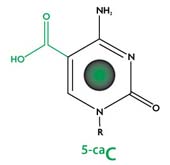 It has been suggested that 5-caC is excised from genomic DNA by thymine DNA glycosylase (TDG), which returns the cytosine residue back to its unmodified state5. 5-Carboxylcytosine has been identified in mouse embryonic stem (ES) cells4. Like 5-fC, this DNA modification appears in the paternal pronucleus post-fertilization, concomitant with the disappearance of 5-methylcytosine, further lending support that this variant is part of a DNA demethylation pathway12.

3-methylcytosine is unlike the other DNA methylation variants in that this modification is not associated with the oxidative pathway of the Tet family of proteins. Instead, 3-methylcytosine is created non-enzymatically via spontaneous exposure of the nitrogen-three base of cytosine to endogenous S-adenosyl methionine.

3-mC is mutagenic in the genome and is repaired through base excision repair (BER) in humans or by dealkylation via human homologues of the E. coli AlkB protein. Cells with a loss of ALKBH3 protein show an increase in 3-methylcytosine and a reduction in cell proliferation13. For researchers interested in this area of research, Active Motif offers antibodies specific for 3-Methylcytosine.