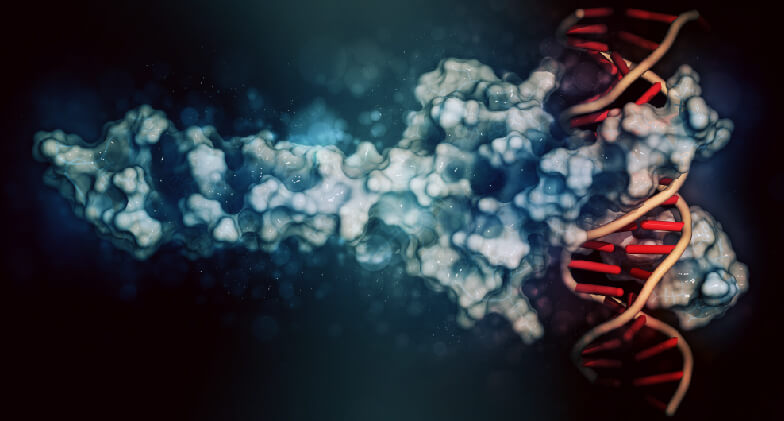 It is well established that DNA is the hereditary material of the cell, and yet for every rule, there is an exception. Prions, or “proteinaceous infectious particles,” are proteins that adopt an ultra-stable alternative conformation that can be transmitted between cells. In other words, a single polypeptide sequence can adopt two distinct conformations: the canonical protein fold, and the highly stable prion fold.

These two conformations can interconvert, and importantly, the prion acts as a template to convert the normal protein form to the prion form.

As the name implies, prions were initially identified as the infectious agent in several neurodegenerative infectious diseases, including Creutzfeldt-Jakob disease in humans and perhaps most famously, Bovine Spongiform Encephalopathy (which is often referred to as “mad cow disease”).

Subsequently, studies in S. cerevisiae have revealed a potential role for prions in epigenetic inheritance and other normal yeast functions.

Typically, these histone modifications induce heterochromatin formation and thus stably transmit a repressive gene state. Until recently, no such reader/writer mechanism has been identified for the transmission of active chromatin states from parental cells to daughter cells, and it has been unclear if activated gene states can be inherited at all. Now, new research from the labs of Anupam Chakravarty, Raymond Futia, and Daniel Jarosz at Stanford University provides a mechanism for the heritable transmission of active chromatin in yeast, but not via the usual epigenetic suspects. Instead, they’ve identified a prion conformer that activates gene expression and is retained trans-generationally.

A Role for Prions in Epigenetic Regulation?

The exact mechanism by which prions convert the original protein conformation to the prion form is still unknown, but the presence of the prion alone is sufficient to induce the conversion, and the prion can be transmitted via the cytoplasm. This self-templating property makes prions infectious, but also heritable.

In humans, this plays out as a protein infection: prions convert a normal protein in the brain to the highly stable, misfolded prion conformation. The prion conformation preferentially forms oligomers called amyloid plaques, which aggregate and ultimately cause the neurodegenerative symptoms seen in prion diseases.

However, research in yeast has revealed a less nefarious role for prions. Various yeast proteins can adopt a prion conformation, altering their cellular function. For example, the yeast protein Ure2p undergoes conversion to the [URE3] prion, which induces changes to nitrogen catabolism. The [PSI+] prion (from the eRF3 protein) alternatively regulates translation termination efficiency, and the interconversion of Swi1 and the prion [SWI+] results in changes to chromatin remodeling. These changes to cellular functions may represent an adaptive and advantageous response to environmental stressors. Prions with functional biological activities have also been identified in plants and fungi.

So how might a prion play a role in epigenetic memory? Epigenetic memory can be defined as the inheritance of a chromatin state in one of two scenarios: Within an organism (stable through mitosis) or from parent to offspring (stable through meiosis). Given that prions are passed through the cytoplasm and can convert a naive cell, it follows that they could be utilized as a mechanism of inheritance. And, as exemplified by the Swi1/[SWI+] prion, they have already been shown to have a role in the epigenetic process of chromatin modification. The self-templating property of prions and their ability to be transmitted via the cytosol (independent of DNA, unlike histone modifications), prions are poised to play a role in both intra-organismal and trans-generational epigenetic memory.

A protein that links both the epigenetics and prion pieces of the puzzle is the yeast Snt1 protein. Snt1 is a putative DNA-binding protein that acts within the larger Set3C histone deacetylase (HDAC) complex. Set3C binds histone 3 at dimethylated lysine 4 (H3K4me2) to mediate histone deacetylation, which generally induces the formation of heterochromatin and gene repression.

Previous work had shown that overexpression of the SNT1 gene resulted in the emergence of a zinc-resistance trait that was transmitted for hundreds of mitotic divisions but did not show a traditional Mendelian inheritance pattern. Thus, Snt1 appears to have a canonical epigenetic role as part of the Set3C HDAC complex, but also has prion-like features.

How Can Active Chromatin States Be Inherited?

In their newly published paper, Daniel Jarosz and the team of researchers at Stanford dug further into the prion-like features of Snt1 and the zinc-resistance trait it confers. The prion in question, which they termed [ESI+], indeed meets all the criteria to be classified as a prion. It adopts a unique and stable conformation, as indicated by a slower rate of proteolysis. It is heritable but non-Mendelian. And most importantly, [ESI+] can alter the conformation of native proteins and successfully infect naive yeast, causing the emergence of the same zinc-resistance phenotype.

They identified Snt1 phosphorylation as the most likely trigger for conversion to the [ESI+] prion form. Phosphorylation of disordered proteins can induce significant conformational changes; Snt1 is known to have many intrinsically disordered regions and within those, multiple phosphorylation sites. Snt1 phosphorylation can be induced by nocodazole treatment, which causes a prolonged G2/M arrest. Nocodazole treatment caused the emergence of an altered Snt1 conformation as well as the zinc-resistance trait, which was confirmed to be caused by the presence of [ESI+]. A phosphomimetic Snt1 mutant also produced the zinc-resistance phenotype. Notably, the authors pointed out that while the nocodazole-induced Snt1 phosphorylation appeared to cause [ESI+], there could be other mechanisms that trigger the prion formation.

An mRNA-Seq screen of [ESI+] and normal yeast revealed ~1,000 transcripts with increased expression in the [ESI+] cells, including many metal-stress-response genes. Further ChIP-Seq analysis showed that the increased mRNA expression corresponded with increased acetylation at histone H4 and increased recruitment of RNA polymerase II at the transcription start site of these genes.

Lastly, they identified the Rap1 protein as a potential interactor with [ESI+]. Rap1 is a DNA-binding protein that regulates transcription at telomeres and sub-telomeres. ChIP-Seq showed that in normal yeast, Rap1 binds broadly at sub-telomeric domains but in [ESI+] yeast, Rap1 binding is drastically reduced in this region and Set3C binding is increased.

The authors proposed that [ESI+] interferes with Rap1 binding at sub-telomeric regions, resulting in the activation of previously repressed genes. They additionally suggested that perhaps there is an evolutionary advantage to the prion state, especially given the [ESI+] phenotype of zinc-resistance. The sub-telomeric domains contain a multitude of stress-response genes, and [ESI+]-activated genes were enriched for genes associated with resistance to antifungal medicines and natural products.

We Still Have a LOT Left to Learn About Epigenetics

The [ESI+] prion acts as an epigenetic, trans-generational activator of yeast genes, representing a novel mechanism for the inheritance of an activated chromatin state. Interestingly, it bears no resemblance to the reader/writer mechanism used to transmit repressed chromatin states, operating entirely independent of not just histones, but also independent of the DNA itself. Other chromatin-associated yeast proteins, including chromatin-modifying proteins, transcription factors, and RNA binding proteins, have been shown to have prion-like properties, indicating that this type of epigenetic inheritance could be a more widespread phenomenon.

The ability of prions to interconvert from one form to the other may also be an evolutionarily advantageous response to stress. In this way, a single polypeptide can have dual, often completely opposing functions in the cell, dependent upon environmental conditions. Any survival advantage to environmental stress is then passed on in the form of prion-regulated gene expression.

This is a paradigm shift away from the view of prions in humans, where we typically only associate them with diseases. It is possible that this yeast prion phenomenon may have some applications in humans as well, given that the Snt1 ortholog NCOR1 is also highly disordered.

This exciting intersection of epigenetics and prion biology leaves much to be discovered, and further research will be needed to see if perhaps prions can play a role in normal human biology as well.