A critical function of non-senescent cells is the ability to replicate their DNA and divide into two new daughter cells. Centromeres play essential roles in the successful completion of mitosis and the cell cycle.

What are Centromeres and What do They Do?

Centromeres are specific and specialized regions of chromosomes that link two sister chromatids and play a critical role during mitosis. Centromeres consist primarily of heterochromatin that keeps them condensed. However, the heterochromatin at centromeric regions is different than standard heterochromatin due to the presence of centromere-specific histone proteins that differ in structure from the canonical histones and have additional functionality.

Centromeres serve as the site of kinetochore assembly, allowing the sister chromatids to correctly to separate to daughter cells during mitosis. Previous research has uncovered various unique components of centromeric nucleosomes and the requirements for their formation, but how these components work together to coordinate kinetochore assembly chromosome partitioning are still not well understood.

A paper in the journal Current Biology addressed these questions using cryogenic electron microscopy (cryo-EM) to investigate the structure of centromeric nucleosome complexes.

The Stages of Mitosis & Details of Centromere Biology

The major phases of mitosis are prophase, metaphase, anaphase, telophase, and cytokinesis. During prophase, chromosomes become condensed and newly replicated sister chromatids are joined at the centromere, where kinetochore components are assembled. As the chromosomes align at the center of the cell during metaphase, spindle fibers attach at the kinetochore. Finally, sister chromatids are pulled apart during anaphase, where centromeres must withstand the physical forces generated. Chromosome pair separation is completed during telophase, which is the final stage of mitosis. Cytokinesis follows, which is when the initial cell divides into two daughter cells.

Centromeres join two sister chromatids during mitosis and additionally serve as an assembly point for kinetochore machinery. In humans, there is no single DNA sequence absolutely required for centromere formation. Instead, there are preferred DNA sequences (typically tandem repeats) called α-satellite sequences, that combine with epigenetic cues to drive centromere formation.

During cell division, the centromeres undergo several important changes. In early prophase, the centromeres of each sister chromatid resolve into two distinct loci as the chromosomes condense. Each sister centromere serves as a site of kinetochore assembly and spindle fiber attachment, which help to align the chromosomes at the metaphase plate and pull apart sister chromatids during anaphase. 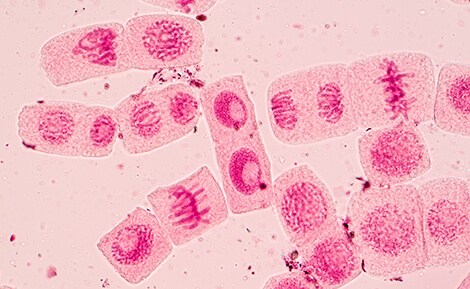 For all of these steps, proper centromere and kinetochore formation are required. Centromere defects can result in failure to properly separate sister chromatids, which in turn can lead to germline disorders such as Down syndrome, while somatic events can lead to cancer.

The canonical nucleosome serves to package and organize the ~3 billion base pairs of human DNA in every cell into various chromatin states. These nucleosomes consist of ~146 base pairs of DNA wrapped around a protein octamer. The octamer is composed of two copies each of four histone proteins: H2A, H2B, H3, and H4.

Centromeres are constitutively compressed as heterochromatin and are associated with a unique and specialized set of nucleosome proteins and other associated proteins.

In the centromeric nucleosome, the canonical H3 histone is replaced with a centromere-specific variant called CENP-A. There are also additional non-histone proteins that make up the core centromeric nucleosome complex (CCNC), including two copies each of the CENP-C and CENP-N proteins, which directly bind to CENP-A. During mitosis, multiple copies of the CCNC assemble at the centromere to facilitate kinetochore binding and attachment to microtubules.

What Can Structural Biology Teach Us About Centromere Biology?

A research team at the University of Pennsylvania and their collaborators initiated an investigation into the stoichiometry of the proteins present in the CCNC complex during mitosis and cell division. They compared cells arrested in interphase with cells arrested in prometaphase and discovered that the levels of CENP-N dropped by 50% during cell division relative to CENP-A, while CENP-C levels were unchanged.

In the form of the CCNC with two subunits of both CENP-N and CENP-C, all of the binding sites on CENP-A were occupied and stoichiometrically even, leading to the conclusion that this version represented the complex during interphase. The alternate complex, containing only one copy of CENP-N, was formed after the cell enters mitosis. The nucleosome face with CENP-N is oriented towards the spindle, such that it can recruit other kinetochore components.

The CCNC structures solved by cryo-EM revealed other useful details of the biology of this complicated protein complex. In particular, the structures showed that both forms of the CCNC exhibited a 3-4 Å bulge in the DNA path, which may be favorable for CENP-N binding. This structural adaptation was only seen when the CCNC was reconstituted with a natural α-satellite DNA sequence. The commonly-used artificial Widom 601 nucleosome positioning sequence failed to produce the same result, implying a role for nucleosome DNA sequence in the overall chromatin structure at centromeres.

Additionally, the researchers reported that the non-histone proteins CENP-C and CENP-N contribute to DNA positioning by constraining the DNA path as it exits the histone. They also described a specific protein domain within CENP-C that confers specificity to CENP-A and centromeric nucleosomes.

The research reported by Allu and colleagues helps build and support a model of a dynamic centromeric nucleosome complex that changes during different stages of the cell cycle.

In the interphase CCNC, two copies each of CENP-C and CENP-N bind the nucleosome. At the onset of mitosis, one copy of CENP-N is lost, forming an asymmetric complex that mimics the asymmetry of the chromatin/spindle fiber interaction.

Importantly, the discovery that the use of a natural versus artificial DNA sequence affects the CCNC structure has far-reaching consequences for centromere research, especially given the prevalence of the Widom 601 nucleosome positioning sequence in previous studies.

Although this work provides deep insight into the centromeric nucleosome structure and mitotic spindle interface, further work will be needed to unravel the exact requirements for centromere formation and the roles of individual components as DNA sequences.