for simultaneous analysis of nucleosome occupancy and DNA methylation profiles

This product has been discontinued

Active Motif's NOMe-Seq Kit is the first commercially available assay that allows you to examine multiple epigenetic modifications on the same DNA molecule. NOMe-Seq is a high resolution single-molecule Nucleosome Occupancy and Methylome sequencing kit that provides both a nucleosome footprint and a DNA methylation profile for the same DNA strand. This enables researchers to study the role of nucleosome occupancy in the context of DNA methylation for their target gene of interest.

NOMe-Seq is listed as one of the Top Ten Innovations 2013 by The Scientist.

The NOMe-Seq assay works by treating fixed chromatin with a GpC methyltransferase enzyme to artificially methylate GpC dinucleotides that are not protected by nucleosomes or other proteins bound to the DNA. Due to the high abundance of GpC residues within the genome, the enzymatic treatment provides a high resolution footprint of nucleosome occupancy. Treated DNA is then subjected to bisulfite conversion and gene-specific loci are sequenced to establish the DNA methylation profile for a single DNA strand. Since GpC dinucleotides are not methylated in mammalian genomes, the endogenous CpG methylation can be distinguished from the artificially introduced GpC methylation. By combining the sequencing information for the GpC sites with the CpG sites, a profile of nucleosome occupancy and DNA methylation for a specific gene locus can be determined.

The genomes of eukaryotic organisms are packaged into chromatin. The nucleosome is the smallest subunit of chromatin and consists of 147 base pairs of DNA wrapped around an octamer of core histone proteins (two each of Histone H2A, Histone H2B, Histone H3 and Histone H4). Chromatin is subjected to a variety of chemical modifications, including post-translational modifications of the histone proteins and the methylation of cytosine residues in the DNA. These modifications play a major role in regulating gene expression by modifying the accessibility of promoter regions to transcriptional machinery.1,2

DNA methylation in mammalian cells is generally associated with gene silencing, either directly by inhibiting binding of transcription factors to their recognition sequences or indirectly by recruitment of chromatin remodeling proteins.8 Mechanisms such as ATP-dependent chromatin remodeling work to alter chromatin structure in order to regulate DNA accessibility.9

Traditional methods are able to determine nucleosome occupancy or DNA methylation independently, but NOMe-Seq is the first technique that is capable of providing simultaneous information on the relationship between the two. Classical techniques to study nucleosome occupancy include nuclease digestion and primer extension,10 such as MNase-seq, which often destroy the physical linkages between binding sites and prevents direct analysis of single molecule promoter function. These methods also require a large amount of material and are variable based on enzyme concentration. Bisulfite sequencing is the gold standard used to obtain single-nucleotide resolution of the DNA methylation profile of a single DNA strand. Bisulfite conversion consists of the treatment of genomic DNA with sodium bisulfite leading to deamination of unmethylated cytosines into uracil while methylated cytosines remain unchanged.

NOMe-Seq stands for Nucleosome Occupancy and Methylome Sequencing. It is a technique that was developed by the Peter A. Jones lab at USC that allows researchers to interrogate the relationship between nucleosome occupancy, transcription factor binding and DNA methylation for specific gene loci.11-14 NOMe-Seq works by treating fixed chromatin with a GpC methyltransferase enzyme to artificially methylate GpC dinucleotides that are not protected by nucleosome or protein binding sites. The high abundance of GpC dinucleotides within the genome allows for better resolution of the nucleosome footprint such that even subtle changes in nucleosome position can be detected. Extracted DNA is then treated with sodium bisulfite to convert unmethylated cytosines into uracil while leaving methylated cytosine residues as cytosine. Following cloning and sequencing, the results can be mapped to compare the artificially methylated GpC and the endogenously methylated CpG residues and establish a temporal relationship between nucleosome occupancy and endogenous DNA methylation.

The information obtained from the NOMe-Seq assay provides researchers with a tool to better understand the different states of chromatin and their effect on gene regulation. For each gene promoter, a researcher can determine if the chromatin contains a nucleosome, or if a nucleosome depleted region (NDR) exists. Chromatin that exists in a nucleosome depleted state and lacks methylation is usually characterized as being actively transcribed. Alternatively, chromatin that contains nucleosomes may be repressed in the absence of DNA methylation by polycomb repressor complexes, or the repressive state may be the result of DNA methylation. Since NOMe-Seq provides details for a single DNA strand, the technology offers a mechanism to analyze allele specific differences or to identify novel imprinted genes. 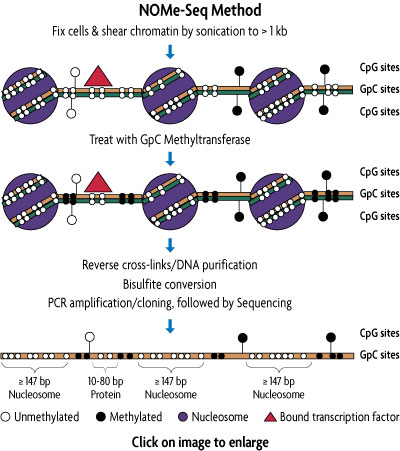 NOMe-Seq works by formaldehyde fixation of cells to preserve nucleosome position as well as protein/DNA binding interactions. The chromatin is sonicated to generate fragments of 1 kb or greater. Following sonication, the chromatin is treated with GpC DNA methyltransferase enzyme to artificially methylate GpC residues that are not protected by nucleosomes or protein binding sites. GpC dinucleotides are significantly more abundant in DNA than CpG dinucleotides and the high prevalence of GpCs within the genome allows for better resolution of nucleosome positioning. Additionally, CpGs are not endogenously methylated in mammalian genomes so the artificial methylation will not interfere with the ability to establish an endogenous methylation profile.

Following reversal of chromatin cross-links and DNA purification, bisulfite conversion is performed on the artificially methylated DNA. The DNA is denatured to a single-stranded state and treated with sodium bisulfite. Unmethylated cytosines are converted to uracil during the treatment while methylated cytosine residues remain as cytosine. Bisulfite conversion allows the methylation status for each cytosine to be determined on an individual DNA strand. For gene-specific analysis, the genomic region of interest is PCR amplified and cloned for sequencing.

Sequencing results can be mapped to compare the artificially methylated GpC and the endogenously methylated CpG residues. A region of GpC sequence data containing unmethylated cytosines spanning a distance of 147 bp or larger represents the position of a nucleosome, while smaller unmethylated regions in the range of 10-80 bp represent the location of a protein binding site. By overlaying sequencing information for the artificial (GpC) and endogenous (CpG) methylation profiles together, a temporal relationship between nucleosome occupancy and DNA methylation can be achieved for a single DNA strand. Negative control reactions will help to resolve if methylation occurring in a GpCpG trinucleotide is endogenously present or artificially introduced. NOMe-Seq has been validated for gene-specific analysis using both traditional Sanger sequencing methods as well as Next-Gen sequencing using an Illumina® library preparation.

The NOMe-Seq assay is shipped on dry ice in two boxes. Each box contains reagents with multiple storage temperatures inside. Please store each component at its recommended temperature. The product is guaranteed stable for 6 months when components are stored properly.

To learn more about the NOMe-Seq technology and its biological applications, we have listed a select number of publications for NOMe-Seq.