Improving the Resolution of Hi-C Assays with Micro-C

How much do you think about the 3-dimensional organization of chromatin when explaining epigenetics to students or addressing a research question?

The 3-dimensional conformation of chromatin inside the nucleus is as important as other epigenetic events like histone modifications and DNA methylation in regulating transcription, DNA repair, and cell fate. To study these interactions, chromosome conformation capture (3C) methods like Hi-C, have been developed to provide high-resolution mapping of genome-wide chromatin interactions.

To expand upon the development of such tools, a recent study reports the development of Micro-C, which is a new and improved variation of Hi-C. In addition to higher resolution and higher signal to noise ratio, Micro-C provided more information on chromatin domain boundaries and identified new chromatin interactions and looping.

Hi-C is Good, But Can it be Improved?

Did you know that researchers have been working on developing 3C tools for over a decade? We have come a long way since then. Compared to previous tools, Hi-C evolved as a rapid and high-throughput provider of genome-wide 3C information and has become the industry-standard method. It is used for various kinds of biological research including oncology, stem cells, regenerative, and precision medicine.

In a new study published in the journal Molecular Cell, a team of researchers described the development of a method called Micro-C with human samples. Micro-C is a variation of Hi-C with further improvements in resolution and signal-to-noise ratio which were some potential limitations of traditional Hi-C due to reagents used in its workflow.

Want to learn more about the development of Hi-C? Check out the recent interview with Erez Lieberman Aiden, one of the original inventors of the Hi-C method, on our Epigenetics Podcast.

The technique Micro-C was first reported in 2015 in a paper where the authors studied chromosome folding in budding yeast and used Micro-C to confirm how different proteins help in yeast genome folding. The more recent study presents Micro-C data from human ESCs and fibroblasts to provide novel high-resolution 3-D chromosomal information. Hence, the Micro-C technique is versatile and able to handle a variety of complex cell types efficiently.

The Micro-C workflow involves chromatin fragmentation performed by micrococcal nuclease (MNase), resulting in the fragmentation of the entire interacting chromatin into mononucleosomes. This is a fundamental difference between Micro-C and Hi-C; Hi-C uses restriction endonucleases instead of MNase to fragment the chromatin.

The general workflow of Hi-C and Micro-C are similar and consist of the following steps:

The researchers found Micro-C to have higher resolution and signal-to-noise ratio than Hi-C. This is because chromatin was fragmented into mononucleosomes by MNase in Micro-C, resulting in increased fragment density and spacing uniformity, compared to the larger fragments of chromatin generated by restriction endonucleases in Hi-C.

TADs consist of regions where the genome physically self-interacts more frequently compared to other sequences outside the domain. TADs result from an ATP-dependent process called loop extrusion which involves the ATPase enzyme cohesin and CTCF, both of which physically associate with DNA. Loop extrusion brings distant parts of the genome, like enhancers and promoters, in close proximity to each other. Although TADs are not fully understood, abnormalities in them are implicated in dysregulated gene expression, developmental disorders, and cancers.

Other features like chromatin compartmentalization help us to understand the active and inactive regions of the genome. Off-diagonal interaction peaks result from a high frequency of CTCF-anchored long-range looping interactions while short-range contacts appear as signals closer to the diagonal of the heatmaps.

Micro-C captured near-diagonal contacts at a 1-5 nucleosome resolution scale, a level of resolution is not obtainable by traditional Hi-C due to technical limitations such as partial digestion by restriction endonuclease and fragment length heterogeneity from uneven positioning of restriction sites. Moreover, artifactual contacts like interchromosomal and extremely long-range intrachromosomal contact frequencies were reduced in Micro-C.

Finally, Micro-C enabled the authors to identify numerous novel looping or chromosomal interactions that were not detected by Hi-C. Taken together, the authors’ observations indicated that Micro-C has a higher resolution and signal-to-noise ratio.

Ready to keep learning more about how functional elements in the genome are organized? Check out the recent interview with Bing Ren, an epigenetics expert in this field, on our Epigenetics Podcast.

Summary: Detailed 3-D Structure of Chromatin is the Next Frontier in Epigenetics – And It’s Within Reach

In the quest for discovering the finest details of the 3-dimensional organization of the genome to solve a wide variety of biological puzzles, Micro-C shows promise as an efficient tool that equips researchers with new information that was previously unavailable.

Micro-C reveals chromatin conformation at a higher resolution and signal-to-noise ratio compared to other methods. MNase-based Micro-C seems to be a step forward from restriction endonuclease-based traditional Hi-C because in this study Micro-C identified novel genomic loci involved in looping interactions. It also indicated a new heterogeneous characteristic of TADs which likely result from multiple weak pause sites for cohesin causing the formation of transient loops during extrusion looping.

The new information on looping and chromatin boundaries enables a better understanding of the interactions of promoters with enhancers or silencers resulting in gene expression, DNA-interacting proteins, and euchromatin-heterochromatin segregation. Abnormal regulations of these processes are implicated in disease, hence an improved picture of 3C architecture will enable us to address various biological problems more efficiently.

Rwik is from Kolkata in eastern India, a city of history, multiple cultures and food. Kolkata is in the state of West Bengal which hosts 2 UNESCO World Heritages, and has part of the Himalayan mountains to its north and the Bay of Bengal to its south. Love of the natural world and mystery novels made Rwik passionate about scientific discovery. Hence, after his undergraduate in biotechnology, Rwik went to Southern Illinois University for a Ph.D., followed by postdoctoral training at the University of Colorado. Interacting with people, traveling, promoting STEM outreach and inclusion, are some of the things Rwik enjoys in addition to the ocean and dancing.

We’d love to hear from you! Please contact us at blog@activemotif.com or on Twitter (@activemotif) to share your thoughts and feedback! We’re also looking for science writers to contribute to MOTIFvations, so if you’re an established science communicator or just want to get started, please reach out – there might be a story we can collaborate on! 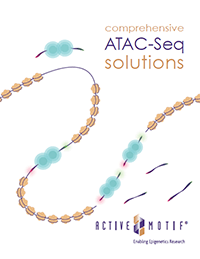