obtain the DNA methylation profile of your ChIP-enriched DNA

Active Motif's ChIP-Bisulfite-Sequencing (ChIP-Bis-Seq) Kit combines the target-specific selection of chromatin immunoprecipitation (ChIP) with bisulfite conversion and sequencing (Bis-Seq) to provide single nucleotide resolution of immunoprecipitated DNA. By combining the two techniques, information about both the chromatin context and the methylation profiles of each DNA strand can be evaluated, enabling better understanding of the biological context and significance regarding gene regulation, gene expression, mechanisms of chromatin modification and pathway analysis.

How does the ChIP-Bis-Seq Kit work?

The ChIP-Bis-Seq Kit consists of three modules. The first is Active Motif’s ChIP-IT® High Sensitivity Kit which is used to immunoprecipitate chromatin associated with a protein or modification of interest in order to reduce the representation to targeted sites of the genome. The second kit module contains methylated adapters and enzymes to enable preparation of a Next-Generation Sequencing (NGS) library from the ChIP DNA. By using methylated adapters, the cytosines within the adapter sequence will remain unchanged during bisulfite conversion and retain their original sequence. The third kit module includes reagents to perform bisulfite conversion on the adapter-ligated DNA. The converted library is PCR amplified, size selected and submitted for NGS. 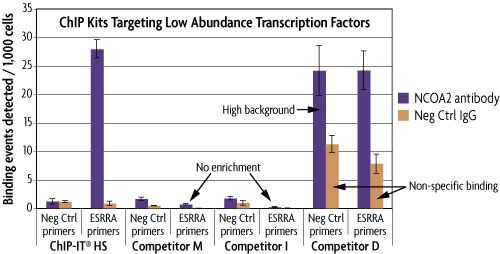 MCF-7 chromatin was prepared according to each manufacturer's recommendations for their ChIP assay from 1.5 x 106 cells. ChIP was performed with the optimal amount of chromatin as suggested by the protocol for each manufacturer using an antibody for the low abundance NCOA2 protein and a negative control IgG. Following enrichment, qPCR was performed using the ChIP-IT qPCR Analysis Kit (Catalog No. 53029) in order to normalize the data and allow for direct comparison of the results. Data is expressed as binding events detected per 1,000 cells which represents the average of the raw data triplicates adjusted for the amount of chromatin in the reaction, the resuspension volume and the primer efficiency.

The ChIP-Bis-Seq Kit utilizes Active Motif's highly efficient bisulfite conversion kit. Following ChIP enrichment, the DNA undergoes end repair and the addition of A overhangs to the 3´ends of DNA fragments. Methylated adapters (compatible with Illumina seqeuncing platforms) are included in the ChIP-Bis-Seq Kit for ligation to the ChIP DNA. The methylated adapters contain methylated cytosine residues throughout the adapter sequence. This prevents conversion of the cytosines during the bisulfite conversion tratement, thereby preserving the original adapter sequence for downstream PCR amplification. During bisulfite conversion, methylated cytosines will be preserved and non-methylated cytosines will be converted into uracil with >98% efficiency. Finally, the ChIP-Bis-Seq Kit contains specialized desulfonation and purification columns that are ideal for use with bisulfite-converted, fragmented, ChIP DNA.

The advantage of the ChIP-BIs-Seq Kit is that it enables direct interrogation of both chromatin and DNA methylation profiles on the same sample. It combines the enrichment properties of chromatin immunoprecipitation to look at specific protein/DNA binding interactions with the single-base resolution of bisulfite sequencing to determine the methylation profile of the DNA binding site. It may be used to evaluate allele-specific differences in DNA methylation (imprinting, X-inactivation) or to study gene regulatory effects.

This figure shows an example of sequencing results using the ChIP-Bis-Seq Kit to analyze the DNA methylation profile of DNA that was enriched using a ChIP antibody for Histone H3K27me3 in PC9 cells. The top track shows a 423 bp region of chromosome 7 from Human Hg19 genome. The next track reveals the ChIP-seq peak profile for Histone H3K27me3. The final track shows the DNA methylation profile of forward and reverse reads as analyzed by bisulfite conversion of the ChIP-enriched DNA. The blue bars represent unmethylated CpGs, while the red bars represent CpGs containing methylation.

The ChIP-Bis-Seq Kit contains separate modules for each stage of the process. One module is for chromatin preparation and immunoprecipitation, another module contains Next-Generation sequencing library reagents and a third module includes the reagents needed for bisulfite conversion. Reagents within each module may contain multiple storage temperatures. All components can be stored at -20°C prior to first use, then we recommend storing each component at the temperatures indicated below. Do not re-freeze the Protein G Agarose Beads once they have been thawed for use.