Active Motif's fast, magnetic protocol has been streamlined to minimize the number of wash and incubation steps, saving you valuable time. The kit also includes MseI-digested human genomic DNA and PCR primers that can be used to verify the efficiency of the enrichment. Additionally, the kit contains a bar magnet for easy separation and elution of the enriched methylated DNA.

Methylated DNA Immunoprecipitation is an immunocapture technique in which an antibody specific for methylated cytosines is used to immunoprecipitate methylated genomic DNA fragments. MeDIP uses single-stranded DNA that has been fragmented by sonication or enzymatic digestion. The addition of a monoclonal antibody specific for 5-methylcytosine in the presence of a bridging antibody enables specific capture of the DNA fragments containing 5-mC methylation. The use of protein G magnetic beads provides quick and efficient capture. Methylated fragments are then eluted from the magnetic beads, resulting in DNA samples that are specifically enriched for 5-mC DNA methylation. This selectivity is important as most common approaches to analyze DNA methylation, such as enzymatic approaches and bisulfite conversion, are unable to distinguish between 5-mC and 5-hmC.

The high affinity of the 5-mC antibody used in the MeDIP Kit enables detection of methylated cytosines regardless of their context. This means that the methylation does not need to occur in the context of a CpG dinucleotide, unlike methyl-binding protein (MBD) affinity enrichment methods which requires CpG methylation for proper detection. 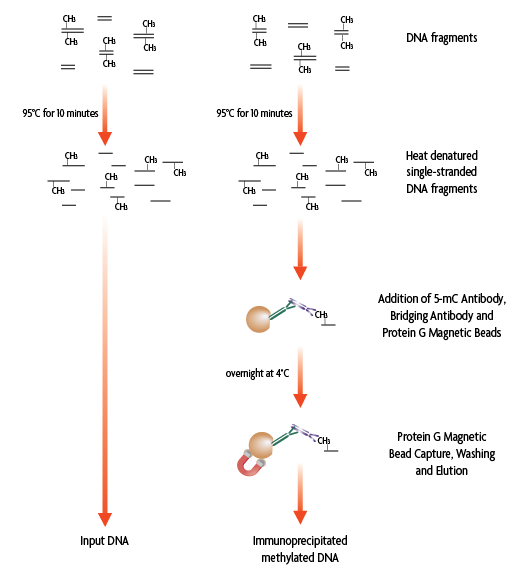 Single-stranded, fragmented genomic DNA containing 5-methylcytosine can be specifically captured from the rest of the genomic DNA with the monoclonal 5-mC antibody in the presence of a bridging antibody and magnetic beads. Following an overnight incubation, the enriched DNA is then eluted from the beads.

Since the MeDIP Kit uses a 5-methylcytosine antibody that only binds methylated cytosines in the context of single-stranded DNA to enrich for methylated genomic DNA, the DNA must be denatured prior to immunoprecipitation. As a result of denaturation, the enriched DNA can not be processed for next-generation sequencing using some common NGS library generation protocols that include adapter ligation to double-stranded DNA.

This problem can be circumvented by either addition of the NGS adapters to fragmented genomic DNA prior to performing MeDIP or using a library preparation protocol that is compatible with ssDNA.

Protocols are provided for the fragmentation of sample DNA all the way through to real time PCR analysis of a locus of interest.

Storage conditions range from room temperature to -20°C; please refer to the manual for proper storage temperatures of each component.

The MeDIP Kit is able to selectively enrich for DNA fragments containing 5-methylcytosine DNA methylation from the rest of the genomic DNA population. The MeDIP Kit was tested using 500 ng of the included MseI-digested human genomic DNA in the presence or absence of bridging antibody. Eluted DNA was purified with Active Motif's Chromatin IP DNA Purification Kit (Catalog No. 58002) and tested in real time PCR with the included ZC3H13 PCR primer set. Results shown in figure 2 demonstrate the importance of using a bridging antibody within the assay. In figure 3, enriched DNA was tested using either the included positive control ZC3H13 PCR primer mix or a negative control GAPDH PCR primer mix. 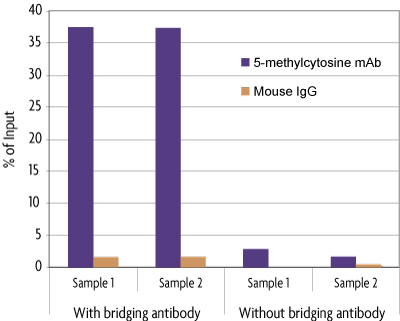 Figure 2: MeDIP Kit in the presence or absence of bridging antibody. 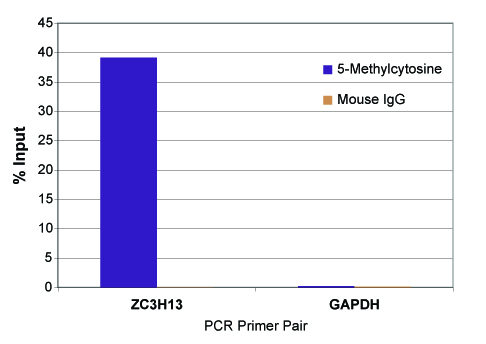 MseI-digested human genomic DNA (500 ng) was processed using the MeDIP Kit with the 5-methylcytosine mAb or negative control mouse IgG. Eluted DNA was column purified with Active Motif's Chromatin IP DNA Purification Kit (Catalog No. 58002) and tested using real time PCR with the included ZC3H13 PCR primer mix and a negative control GAPDH PCR primer mix. The 5-methylcytosine antibody specifically enriched methylated DNA with the ZC3H13 locus but did not enrich for DNA with either the GAPDH locus or the mouse IgG. Data shown are the results from samples assayed in duplicate.

DNA was enriched from 1 ug of adaptor-ligated human PBMC DNA using Active Motif’s MeDIP Kit. NGS was performed using the Illumina platform to generate 26 million sequence tags. Tags were mapped to generate a whole-genome DNA methylation profile. The image above shows two examples of DNA methylation being detected at CpG shores rather than in the CpG island itself. This data agrees with recent findings showing that a large portion of methylated sites occur in these regions that are adjacent to CpG islands.

Search our database of customer publications that have used our MeDIP Kit.