The Chromatin Assembly Kit enables you to study your DNA sequence of interest in a native chromatin environment. The simple, easy-to-follow protocol generates assembled chromatin in hours with few manipulations, providing you with material that is ideal for downstream applications such as in vitro ChIP, transcription and histone modification assays.

To study specific histone modifications within a chromatin context, Active Motif's Recombinant Histones with site and degree-specific modifications can be used as substrates for chromatin assembly. 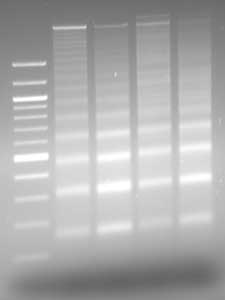 Figure 1: Digestion of chromatin assembled from supercoiled circular and linear DNA. One hundred µl reactions were performed on 1 µg of either linear or circular DNA using the Chromatin Assembly Kit protocol. Following the chromatin assembly incubation, each reaction was divided in two, and partially digested with 0.5 µl Enzymatic Shearing Cocktail for 2 and 4 minutes, respectively. Samples were subsequently deproteinated with Proteinase K, phenol/chloroform extracted and analyzed by agarose gel electrophoresis.