for quantification of global 5-mC levels in DNA 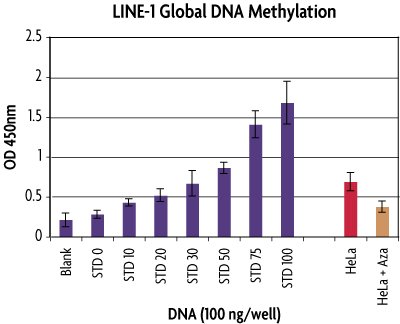 Active Motif’s Global DNA Methylation – LINE-1 Kit contains an optimized protocol and all necessary reagents to perform DNA fragmentation, hybridization, capture, and colorimetric detection of 5-mC. For added convenience, methylated and non-methylated DNA standards containing known levels of LINE-1 methylation are included in the kit. Standards can be utilized to generate a standard curve for determination of % 5-mC values for the DNA samples.

To learn more about the LINE-1 Global DNA Methylation Kit, click on the Method, Data, or Contents tabs below. To view a manual or other related documents, click on the Documents tab below.

The methylation status of high copy number repetitive elements such as LINE-1 has emerged in the literature as a readout of global, genome-wide methylation levels, supplanting high performance capillary electrophoresis (HPCE) or HPLC, or antibody based methods (i.e., IHC, flow cytometry, Southwestern blots) that measure total 5-mC as a percentage of total cytosine3. Repetitive elements comprise approximately 45% of the human genome and consist of either tandem repeats of simple (satellite DNA) or complex sequences, or interspersed repeats derived from non-autonomous or autonomous transposable elements4-8. It is estimated that more than one-third of DNA methylation occurs in repetitive elements9-11. LINE-1 repeats represent approximately 17-18% of the human genome, with a copy number estimated at roughly half a million12. Recent publications demonstrate that analysis of the methylation status of high copy number repeat elements such as LINE-1 can serve as a surrogate marker for global genomic DNA methylation13-15. Comparisons of the methylation status of the LINE-1 repeat elements shows strong correlation with global 5-mC levels observed with high performance liquid chromatography (HPLC) or combined bisulfite restriction analysis (COBRA) and pyrosequencing13,15. LINE-1 hypomethylation is associated with elevated risk of several disease states including cancer, stroke and heart disease and is considered a prognostic factor in gliomas16-22.

In the Global DNA Methylation – LINE-1 Assay, genomic DNA of interest is fragmented by enzymatic digestion and hybridized to a biotinylated human LINE-1 consensus sequence. Hybridized DNA is immobilized onto a streptavidin-coated plate, while unbound DNA fragments are washed away. This method enables specific capture of methylated genomic DNA fragments, rather than passive adsorption of DNA, for adhering DNA to the assay wells. Since non-specific fragments are washed away, the DNA content for interrogation is reduced, resulting in lower background and increased sensitivity of the assay. Once the DNA fragments are immobilized on the plate, a 5-Methylcytosine antibody and a secondary antibody conjugated to horseradish peroxidase (HRP) are used for detection of methylated fragments. The colorimetric readout is then easily quantified by spectrophotometry.

The Global DNA Methylation – LINE-1 Assay can be completed in less than 5 hours and is highly sensitive, enabling detection of as low as 0.5% methylation. Although we recommend starting with a concentration of 100 ng/well of input DNA, the assay has been observed to detect 5-mC from as little as 10 ng of input DNA.

How does the Global DNA Methylation – LINE-1 Assay work? 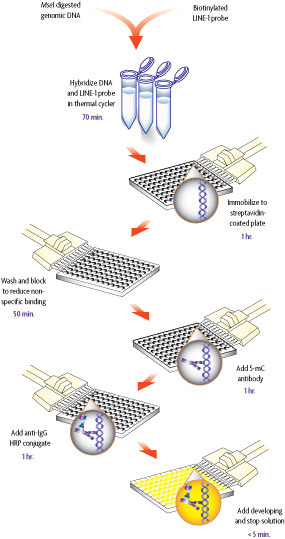 In the Global DNA Methylation – LINE-1 Assay, the genomic DNA of interest is first enzymatically digested using the provided MseI enzyme to generate the appropriate fragments to hybridize to a biotinylated consensus sequence corresponding to human LINE-1 transposon. The LINE-1 probe is designed to assay a 290 bp region of the LINE-1 repeat element containing 88 cytosine residues, of which 12 are in a CpG context. Hybridized samples are immobilized to a 96-well plate and methylated cytosines are identified using a 5-methylcytosine antibody, HRP-conjugated secondary antibody and colorimetric detection reagents. Generating a standard curve using the included DNA standards with known LINE-1 methylation levels provides the relative level of 5-methylcytosine in each DNA sample.

The Global DNA Methylation – LINE-1 Kit is an ELISA-based assay that is specially formulated for detection and quantitation of 5-methylcytosine (5-mC) levels of human genomic DNA. For added convenience, methylated and non-methylated DNA standards with known LINE-1 methylation levels are provided for generating a standard curve to determine relative levels of 5-methylcytosine of the DNA samples.

The Global DNA Methylation – LINE-1 Kit was used to assay 100 ng per well of MseI digested genomic DNA from HeLa cells or HeLa cells treated with 0.05 µM 5-azacytidine. Treatment of cells with 5-azacytidine, a known inhibitor of DNA methyltransferases (DNMTs), results in a decrease in global methylation as compared to untreated HeLa cells as expected. Using the provided standards and curve fitting software, the percent 5-methylcytosine for each DNA sample can be determined. 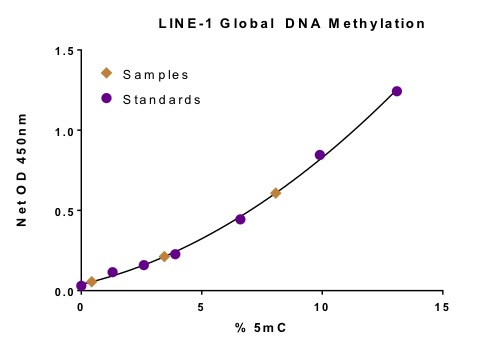 The % 5-methylcytosine (% 5-mC) represented by each DNA standard was plotted on the x-axis and the Net OD 450nm readings for both the standards (triangles) and samples (circles) were plotted on the y-axis. The best curve fit was determined using Readerfit software (https://Readerfit.com) and the % 5-mC values for the DNA samples were extrapolated from the curve. The dynamic range of the suggested standard curve can detect percent methylation in the range of 1% to 13%, although the assay has been shown to detect as little as 0.5% methylation.

The Global DNA Methylation – LINE-1 Kit is shipped on dry ice and contains reagents with multiple storage temperatures inside. Please confirm receipt of all reagents upon arrival and store items at the appropriate temperatures as indicated below. All reagents are guaranteed stable for 6 months from date of receipt when stored properly. This kit includes the following components: