MicroRNAs (miRNAs) are important post-transcriptional regulators that are thought to repress expression by targeting the 3´UTR of mRNA transcripts. The interaction of a miRNA with a 3´UTR results in either the degradation of the target transcript or inhibition of translation.

LightSwitch™ miRNA Mimics are transfected into cells to study the effects of over-expression of a miRNA of interest. In contrast, LightSwitch miRNA Inhibitors are used to knock down the expression of endogenous human miRNAs in living cells.

Find miRNA Mimics & Inhibitors by clicking one of the groups below: 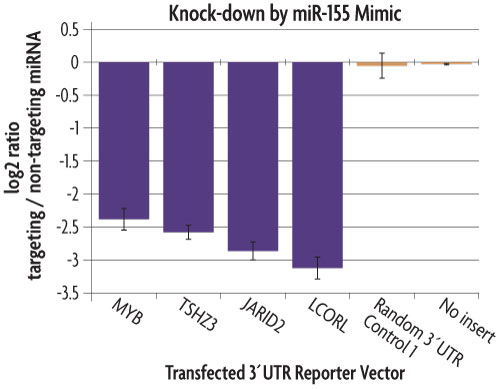 Figure 1: Knock-down of 3´UTR targets in the presence of miR-155 Mimic.

Four LightSwitch 3´UTR Reporter GoClones containing validated targets of miR-155 and two negative control vectors (Random 3´UTR Control 1 and pLightSwitch_3UTR with No Insert) were co-transfected with 50 nM of miRNA mimic or a non-targeting control miRNA in K-562 cells. The knockdown of each vector was calculated as the log2 ratio of miR-155 signal divided by the non-targeting control signal. The four known 3´UTR targets of miR-155 show a strong knockdown compared to the two negative control vectors.

The data above demonstrates the knock-down in luciferase signal from LightSwitch 3´UTR Reporter GoClone constructs that contain validated targets of miR-155 when co-transfected with miR-155 Mimic relative to co-transfection with a non-targeting control miRNA.

There are >2,500 miRNAs in the human genome; they range in length from 21-25 nucleotides. miRNAs regulate gene expression by binding to the 3-prime Untranslated Region (3´UTR) of messenger RNA transcripts (mRNAs). This interaction can both affect the rate of transcript degradation as well as the efficiency of translation. Both mechanisms result in a reduction in the amount of protein produced from the mRNA.

LightSwitch miRNA Mimics are chemically optimized synthetic double-stranded RNAs that act as functional equivalents to endogenous human miRNAs. They can be transfected into cells to study the effects of over-expression of a miRNA of interest. They can also be co-transfected with LightSwitch 3´UTR Reporter GoClone constructs to validate the 3´UTR targets of your miRNAs of interest (Figure 1).

LightSwitch miRNA Inhibitors are chemically optimized synthetic single-stranded RNAs that are used to knock down the expression of endogenous human miRNAs in living cells. They can be transfected into cells to study the effects of the loss of function of a miRNA of interest and can also be co-transfected with 3´UTR Reporter GoClone constructs for 3´UTR target validation.

LightSwitch miRNA Mimics and Inhibitors are shipped as lyophilized pellets. The lyophilized miRNA products are stable at -20°C. After resuspension, the products can be stored at -80°C. For maximum stability, minimize the number of freeze-thaw cycles of the products in solution. All reagents are guaranteed stable for 6 months when stored properly.