Recombinant Histone H3K9ac (EPL) has been generated using the patented Expressed Protein Ligation (EPL) technology. EPL can be used to generate methylated, acetylated or phosphorylated histones. In EPL, the histone globular domain is ligated to a peptide that contains the N-terminal histone tail with the desired site-specific modification. The ligation reaction maintains the native histone bonds, and the resulting recombinant protein more closely mimics natural histones.

25 µg supplied as lyophilized powder. Recombinant histones can be resuspended in water or any suitable buffer. We recommend a starting concentration of 1 mg/ml. To fully solubilize the histone we suggest resuspension in the buffer of choice at room temperature for 20-30 minutes with occasional pipetting. Addition of salt or Tris to the resuspension buffer may enhance histone solubility.

Histone H3 is one of the core components of the nucleosome. The nucleosome is the smallest subunit of chromatin and consists of 146 base pairs of DNA wrapped around an octamer of core histone proteins (two each of H2A, H2B, H3 and H4). Histone H1 is a linker protein, present at the interface between the nucleosome core and DNA entry/exit points.

Recombinant histones are suitable for use as positive controls in the analysis of histone post-translational modifications, as substrates for histone modification enzymes, or to generate chromatin in vitro.

Recombinant Histone H3 acetyl Lys9 (H3K9ac) proteins are generated using expressed protein ligation (EPL) technology. Truncated human Histone H3.2 is produced in E. coli and purified using FPLC. The purified protein is subsequently ligated to a N-terminal histone tail peptide containing acetylated lysine 9 via a native peptide bond. The full-length protein is then repurified prior to lyophilization. Protein concentration was determined using the molar extinction coefficient for Histone H3 and absorbance at 280nm. The recombinant histone is >98% pure by SDS-PAGE and confirmed by high-resolution ESI-TOF mass spectrometry. The molecular weight of the recombinant histone is 15,268 Daltons. Please click on the image below to view the mass spectrum. 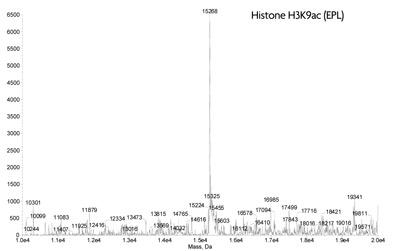 Lyophilized proteins can be stored at -20°C or -80°C, preferably desiccated. Recombinant proteins in solution are temperature sensitive and must be stored at -80°C to prevent degradation. Avoid repeated freeze/thaw cycles and keep on ice when not in storage.