The modENCODE and NIH Roadmap Epigenomics Mapping Consortiums have implemented rigorous standardization criteria for all assays and reagents to be used. As part of this initiative, antibody specificity testing and the ability of the antibodies to work in ChIP-Seq were assessed in a large-scale study. This Histone H3 acetyl Lys9 antibody was validated for ChIP-Seq in the study (see references).

This Histone H3 acetyl Lys9 antibody was raised against a peptide including acetyl-lysine 9 of histone H3.

Rabbit serum containing 30% glycerol and 0.035% sodium azide. Sodium azide is highly toxic. For your convenience, an IgG version (Catalog No. 39917) of this antibody that was purified by Protein A Chromatography is also available. 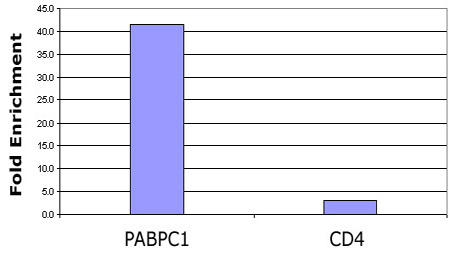 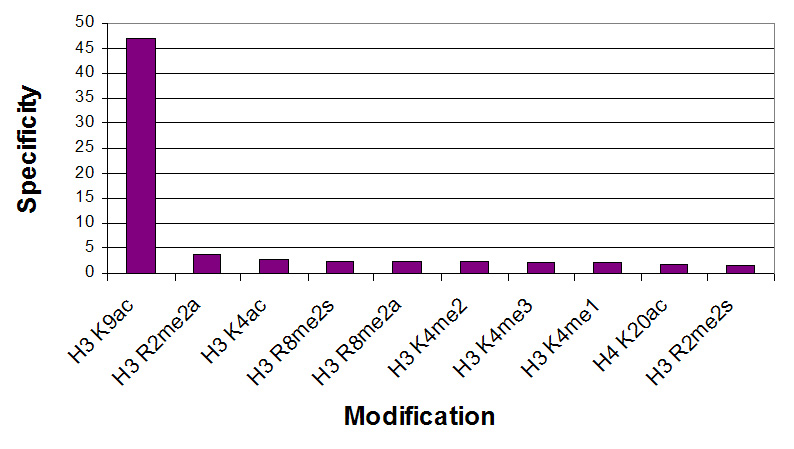 Histone H3 acetyl Lys9 antibody specificity tested by peptide array analysis.
Peptide array analysis was used to confirm the specificity of this antibody for its intended modification. Histone H3 acetyl Lys9 antibody was applied at a dilution of 1:3,000 to Active Motif's MODified™ Histone Peptide Array (Catalog No. 13001). The arrays were scanned with ArrayAnalysis Software 7 and the results plotted. Specificity data is shown for the most reactive peptides.

Histone H3 is one of the core components of the nucleosome. The nucleosome is the smallest subunit of chromatin and consists of 147 base pairs of DNA wrapped around an octamer of core histone proteins (two each of Histone H2A, Histone H2B, Histone H3 and Histone H4). Chromatin is subject to a variety of chemical modifications, including post-translational modifications of the histone proteins and the methylation of cytosine residues in the DNA. Reported histone modifications include acetylation, methylation, phosphorylation, ubiquitylation, glycosylation, ADP-ribosylation, carbonylation and SUMOylation; these modifications play a major role in regulating gene expression. Lysine N-ε-acetylation is a dynamic, reversible and tightly regulated protein and histone modification that plays a major role in chromatin remodeling and in the regulation of gene expression in various cellular functions. Histone H3 Lys9 can also be mono-, di- or trimethylated. The methylation of this residue is often associated with transcriptional repression. However, acetylation of histone H3 Lys9 is associated with transcriptional activation of the genes.

This antibody has been validated for use in ChIP and/or ChIP-Seq, and can be used with Active Motif's ChIP-IT® High Sensitivity Kit or our magnetic bead-based ChIP-IT® Express Kits. For an overview of all of our ChIP products, please visit our Chromatin IP Page to learn about ChIP products designed for use with Histone H3K9ac antibody (pAb).