Bromodomain-containing protein 2 (BRD2), also known as RING3, belongs to the BET subclass of proteins, which are characterized by two N-terminal bromodomains and one ET (Extra Terminal) domain. BRDs associate with chromatin through their bromodomains that recognize acetylated histone lysine residues. Bromodomains function as ‘readers’ of these epigenetic histone marks and regulate chromatin structure and gene expression by linking associated proteins to the acetylated nucleosomal targets. The ET domain functions as a protein binding motif and exerts atypical serine-kinase activity. The BET family consists of at least four members in mouse and human, BRD2 (also referred to as FSRG1, RING3), BRD3 (FSRG2, ORFX), BRD4 (FSRG4, MCAP/HUNK1), and BRDT (FSRG3, BRD6). BRD proteins are related to the female sterile homeotic protein gene in Drosophila, a gene required maternally for proper expression of other homeotic genes, such as Ubx, which is involved in pattern formation. BRD2 causes elevated protein kinase activity in leukemias. Transgenic mice overexpressing BRD2 in the lymphoid system develop diffuse large-cell lymphoma. BRD2 has been shown to interact with E2F1 and with histone H4 acetylated at Lys12 via its two bromodomains. BRD2 may play a role in spermatogenesis or folliculogenesis. Genetic evidence links the BRD2 gene to both juvenile myoclonic epilepsy and photoparoxysomal responses.

Recombinant BRD2 (344-455) is suitable for use in binding assays, inhibitor screening, and selectivity profiling. 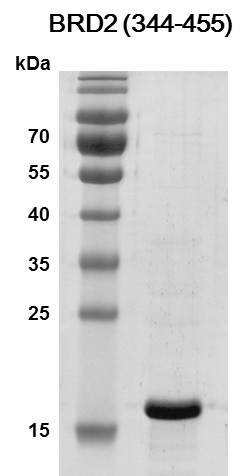 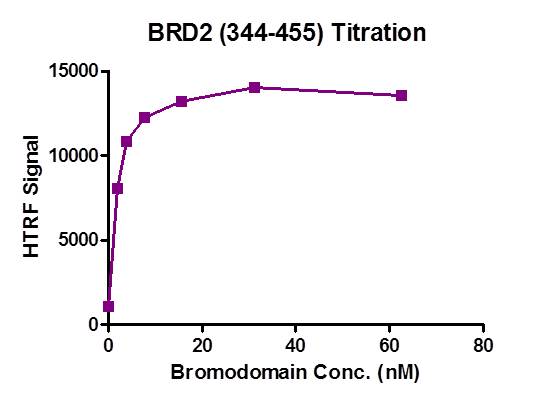 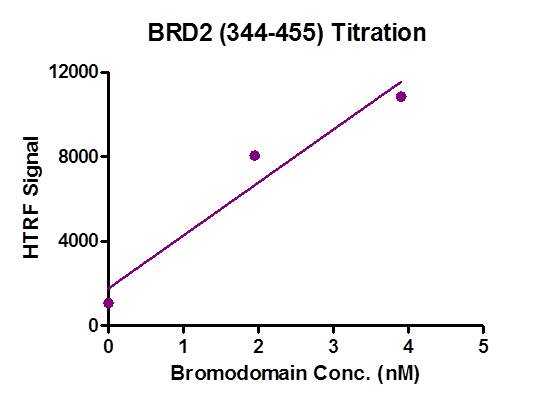