In vivo, the nucleosome is the basic structural unit of chromatin. It is comprised of about 146 bp of DNA wrapped around a core of eight histones, made up of of four different types: H2A, H2B, H3 and H4. Histones are subject to posttranslational modifications, such as methylation, acetylation, phosphorylation, and mono-ubiquitination. Histone modifications influence multiple chromatin templated processes such as gene transcription, DNA repair and recombination. Besides the “major“ histones, there are some histone variants in specific regions of chromatin or in specific cell types. Histone variants are involved in multiple processes, including chromosome segregation, DNA repair, transcriptional regulation and mRNA processing.

H2A.Bbd (Barr Body Deficient) is a histone H2A family member. H2A.Bbd is one of the most rapidly evolving variants, which shares 48% sequence identity with the major H2A histone. H2A.Bbd is excluded from the inactive X chromosome and is enriched in active regions of genome. H2A.Bbd is enriched at sites of DNA synthesis. H2A.Bbd nucleosomes are less stable than those bearing the major H2A histone and to organize only 118 bp of DNA, indicating that DNA in H2A.Bbd chromatin may be more accessible and, thus, more amenable to transcription. H2A.Bbd is involved in mammalian spermiogenesis.

Nucleosomes are more physiologically relevant substrates than histones and histone-derived peptides for in vitro studies. More importantly, some histone methyltransferases are significantly more active, as well as specific, when using nucleosomal substrates in HMT assays, such as DOT1L and NSD family enzymes. Nucleosomes are also widely used in histone methyltransferase screening assays to identify small molecular inhibitors for drug discovery.

Recombinant Mononucleosomes (H2A.Bbd) - biotinylated, are suitable for use as substrates in the study of enzyme kinetics, inhibitor screening, and selectivity profiling. 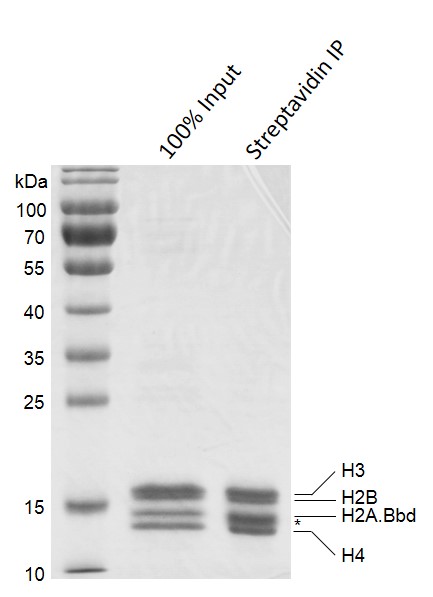 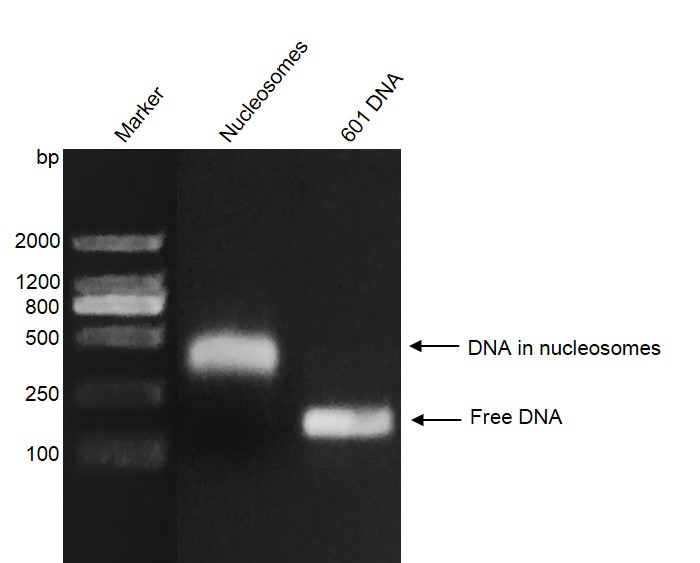 The agarose gel result shows that almost all of 601 DNA wrap histone octamers to form mononucleosomes.