The Histone octamer is the eight protein complex found at the center of a nucleosome core particle. It consists of two copies of each of the four core histone proteins (H2A, H2B, H3 and H4). The octamer assembles when a tetramer, containing two copies of both H3 and H4, complexes with two H2A/H2B dimers. Each histone has both an N-terminal tail and a C-terminal histone-fold. Both of these key components interact with DNA in their own way through a series of weak interactions, including hydrogen bonds and salt bridges.

Histone H3.1 and Histone H3.3 are the two main Histone H3 variants found in plants and animals. They are known to be important for gene regulation. Histone H3.1 and H3.3 have been shown to demonstrate unique genomic localization patterns thought to be associated with their specific functions in regulation of gene activity. Specifically, Histone H3.1 localization is found to coincide with genomic regions containing chromatin repressive marks (H3K9me3, H3K27me3 and DNA methylation), whereas Histone H3.3 primarily colocalizes with marks associated with gene activation (H3K4me3, H2BK120ub1, and RNA pol II occupancy). Deposition of the Histone H3.1 variant into the nucleosome correlates with the canonical DNA synthesis-dependent deposition pathway, whereas Histone H3.3 primarily serves as the replacement Histone H3 variant outside of S-phase, such as during gene transcription. Aberrant localization of these variants is also known to correlate with certain cancers.

Recombinant Histone Octamer (H3.3) - biotinylated is suitable for use in the study of enzyme kinetics, inhibitor screening, and selectivity profiling. 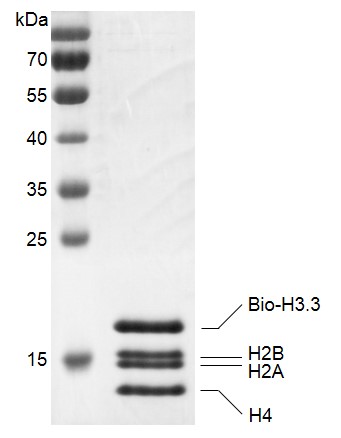