ChIP-Seq validation was performed by Active Motif's Epigenetics Services; the complete data set is available in the UCSC Genome Browser by clicking here.

For optimal results in Western blotting, primary antibody incubations should be performed overnight at 4°C. Individual optimization may be required.

This Histone H4 acetyl Lys16 antibody was raised against a peptide including acetyl-lysine 16 of histone H4.

Rabbit serum containing 30% glycerol and 0.035% sodium azide. Sodium azide is highly toxic. For your convenience, an IgG version (Catalog No. 39929) of this antibody that was purified by Protein A Chromatography is also available.

Histone H4K16ac antibody (pAb) tested by ChIP-Seq.
ChIP was performed using the ChIP-IT® High Sensitivity Kit (Cat. No. 53040) with 15 ug of chromatin from HeLa cells and 10 µl of antibody. ChIP DNA was sequenced on the Illumina HiSeq and 12 million sequence tags were mapped to identify Histone H4K16ac binding sites. The image shows binding across a region of chromosome 5. You can view the complete data set in the UCSC Genome Browser, starting at this specific location, here. 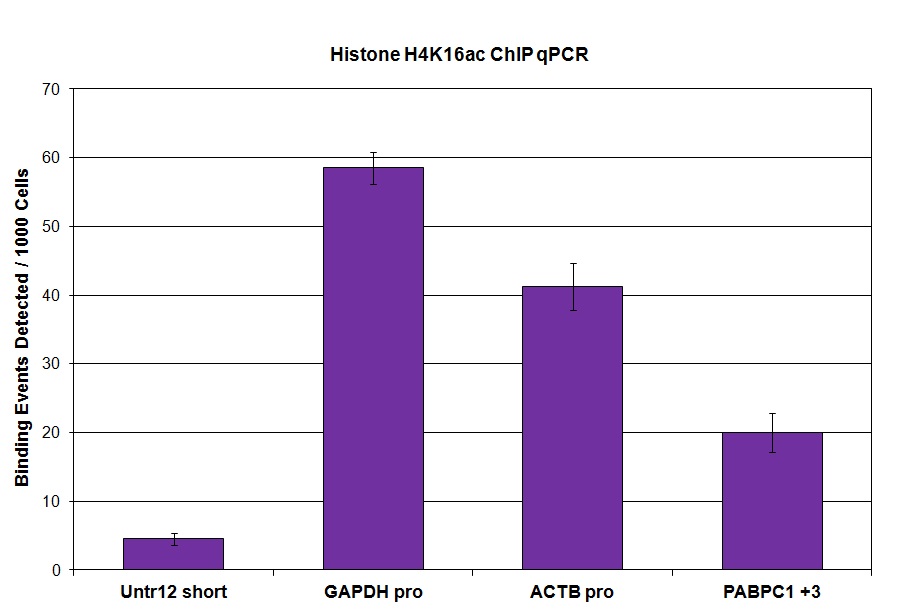 Histone H4K16ac antibody (pAb) tested by ChIP.
Chromatin immunoprecipitation (ChIP) was performed using the ChIP-IT® High Sensitivity Kit (Cat. No. 53040) with 5 µg of chromatin from HeLa cells and 10 µl of Histone H4K16ac antibody. ChIP DNA was used in qPCR with the negative control primer pairs or gene-specific primer pairs as indicated. Data are presented as Binding Events Detected per 1000 Cells using Active Motif's Epigenetic Services normalization scheme which accounts for primer efficiency and the amount of chromatin used in the ChIP reaction. 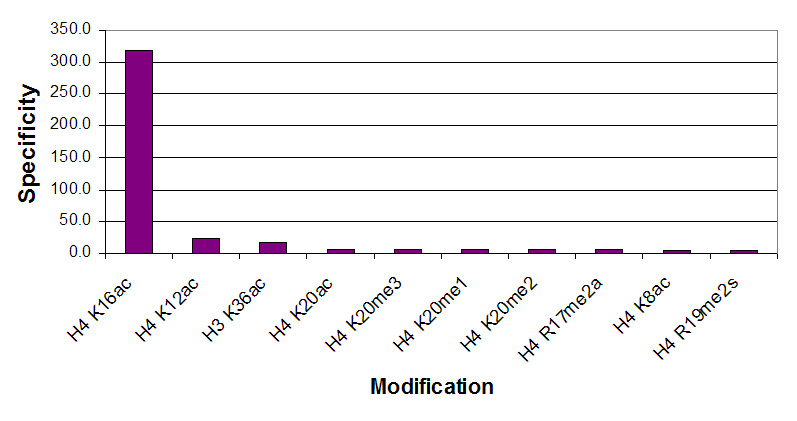 Histone H4K16ac antibody (pAb) specificity tested by peptide array analysis.
Peptide array analysis was used to confirm the specificity of this antibody for its intended modification. Histone H4 acetyl Lys16 antibody was applied at a dilution of 1:10,000 to Active Motif's MODified™ Histone Peptide Array (Catalog No. 13001). The arrays were scanned with ArrayAnalysis Software 7 and the results plotted. Specificity data is shown for the most reactive peptides and those related to the immunogen. In the array, the acetyl Lys16 modification is found on peptides with two different backbone sequences (H4 amino acids 1-19 and amino acids 11-30) so reactive and related peptides for both peptides is shown.
Array Data File

Histone H4 is one of the core components of the nucleosome. The nucleosome is the smallest subunit of chromatin and consists of 147 base pairs of DNA wrapped around an octamer of core histone proteins (two each of Histone H2A, Histone H2B, Histone H3 and Histone H4). Histone H1 is a linker histone, present at the interface between the nucleosome core and DNA entry/exit points; it is responsible for establishing higher-order chromatin structure. Chromatin is subject to a variety of chemical modifications, including post-translational modifications of the histone proteins and the methylation of cytosine residues in the DNA. Reported histone modifications include acetylation, methylation, phosphorylation, ubiquitylation, glycosylation, ADP-ribosylation, carbonylation and SUMOylation; they play a major role in regulating gene expression.

Lysine N-ε-acetylation is a dynamic, reversible and tightly regulated protein and histone modification that plays a major role in chromatin remodeling and in the regulation of gene expression in various cellular functions. NoRC is a SMARCA5 (SNF2h)-containing chromatin remodeling complex. The bromodomain of TIP5, the large subunit of NoRC, interacts with acetylated Histone H4 Lys16, (H4K16ac) and cooperates with an adjacent PHD finger to recruit histone deacetylases and DNA methyltransferases to rDNA, leading to the silencing of rDNA.

This antibody has been validated for use in ChIP and/or ChIP-Seq, and can be used with Active Motif's ChIP-IT® High Sensitivity Kit or our magnetic bead-based ChIP-IT® Express Kits. For an overview of all of our ChIP products, please visit our Chromatin IP Page to learn about ChIP products designed for use with Histone H4K16ac antibody (pAb).