This antibody was raised against a peptide including acetyl-lysines contained in the N-terminal tail of human Histone H3.

Purified IgG in PBS with 30% glycerol and 0.035% sodium azide. Sodium azide is highly toxic. For your convenience, a sera version (Catalog No. 39139) of this antibody is also available. 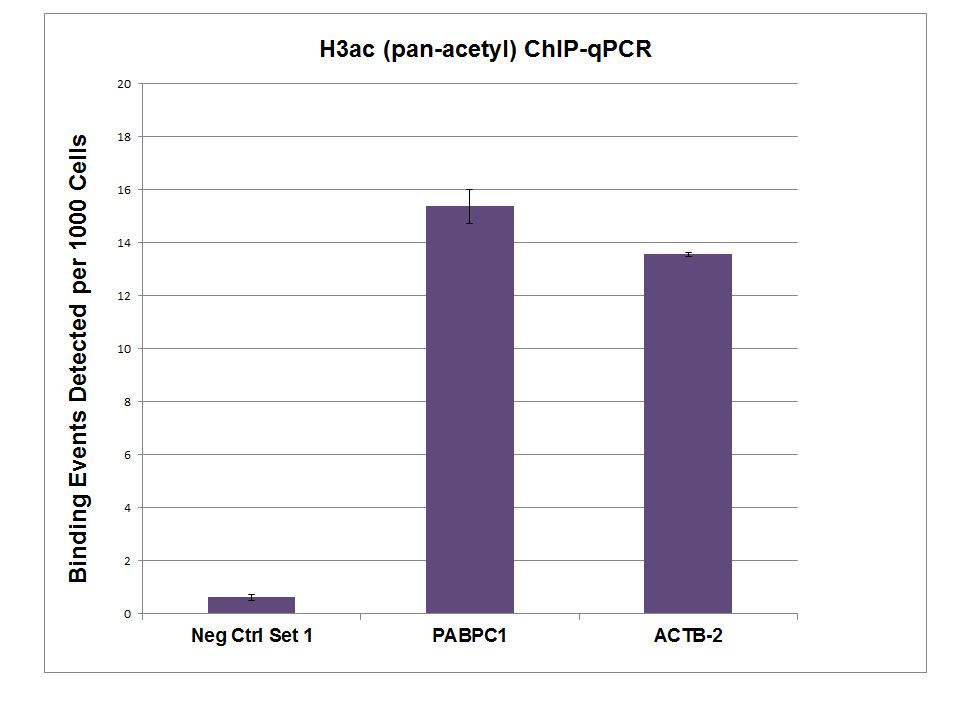 H3ac (pan-acetyl) antibody (pAb) tested by ChIP.
Chromatin immunoprecipitation (ChIP) was performed using the ChIP-IT® High Sensitivity Kit (Cat. No. 53040) with 13 µg of chromatin from both HeLa cells and 10 µg H3ac (pan-acetyl) antibody. ChIP DNA was used in qPCR with the gene-specific primer as indicated. Data are presented as Binding Events Detected per 1000 Cells using Active Motif's Epigenetic Services normalization scheme which accounts for primer efficiency and the amount of chromatin used in the ChIP reaction.

Lysine N-ε-acetylation is a dynamic, reversible and tightly regulated protein and histone modification that plays a major role in chromatin remodeling and in the regulation of gene expression in various cellular functions. Acetylation of histone H3 occurs at several different lysine positions in the histone tail, and is performed by Histone Acetyltransferases (HATs) such as CBP/p300. Acetylation of histones is often associated with transcriptional activation.

This antibody has been validated for use in ChIP and/or ChIP-Seq, and can be used with Active Motif's ChIP-IT® High Sensitivity Kit or our magnetic bead-based ChIP-IT® Express Kits. For an overview of all of our ChIP products, please visit our Chromatin IP Page to learn about ChIP products designed for use with Histone H3ac (pan-acetyl) antibody (pAb).