HDAC3 (Histone Deacetylase 3, also designated HD3) is a member of the class I mammalian histone deacetylases (HDACs) involved in regulating chromatin structure during transcription. These enzymes catalyze the removal of acetyl groups from lysine residues of histones and other cellular proteins. Lysine N-ε-acetylation is a dynamic, reversible and tightly regulated protein and histone modification that plays a major role in regulation of gene expression in various cellular functions. It consists of the transfer of an acetyl moiety from an acetyl coenzyme A to the ε-amino group of a lysine residue.

In vivo, acetylation is controlled by the antagonistic activities of histone acetyltransferases (HATs) and histone deacetylases (HDACs). The HDACs are grouped into four classes, on the basis of similarity to yeast counterparts: class I (HDAC1, HDAC2, HDAC3 and HDAC8), class II (HDAC4, HDAC5, HDAC6, HDAC7, HDAC9 and 10), class III (SIRT1-7) and class IV (HDAC11). By forming multi-protein complexes with the co-repressor NCOR2, HDAC3 regulates the transcription of a plethora of genes. A growing list of non-histone proteins extends the role of HDAC3 beyond transcriptional repression. HDAC1, HDAC2 and HDAC3 are also ubiquitously expressed and can deacetylate both H3 and H4 in free histones or nucleosome substrate.

This HDAC3 / NCOR2 protein complex is useful for the study of enzyme kinetics, screening inhibitors, and selectivity profiling. 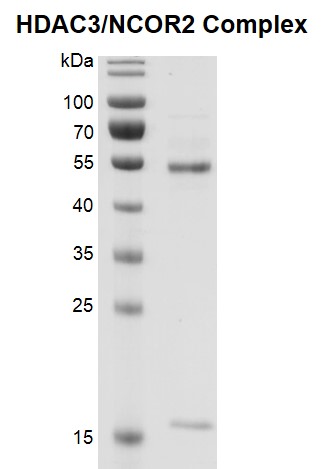 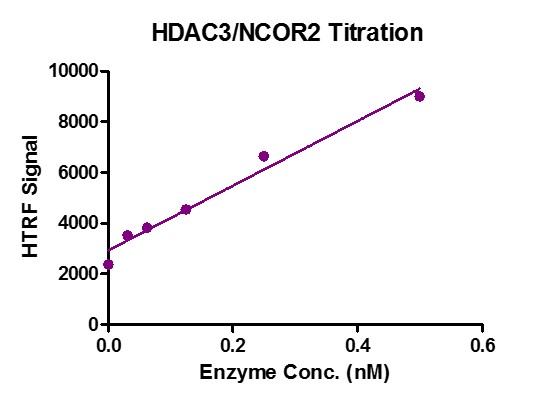 HDAC3 / NCOR2 complex was run on an 12% SDS-PAGE gel and stained with Coomassie Blue.
(Click image to enlarge and see details).