HDAC5 (Histone Deacetylase 5) is a member of the class IIa mammalian histone deacetylases (HDACs) involved in regulating chromatin structure during transcription. These enzymes catalyze the removal of acetyl groups from lysine residues of histones and other cellular proteins. Lysine N-ε-acetylation is a dynamic, reversible and tightly regulated protein and histone modi cation that plays a major role in regulation of gene expression in various cellular functions. It consists of the transfer of an acetyl moiety from an acetyl coenzyme A to the ε-amino group of a lysine residue.

In vivo, acetylation is controlled by the antagonistic activities of histone acetyltransferases (HATs) and histone deacetylases (HDACs). The HDACs are grouped into four classes, on the basis of similarity to yeast counterparts: HDAC class I (HDAC1, HDAC2, HDAC3 and HDAC8), class II (HDAC4, HDAC5, HDAC6, HDAC7, 9 and 10), class III (SIRT1-7) and class IV (HDAC11).

Like HDAC4, HDAC5 shuttles between the nucleus and cytoplasm. In muscle cells, this protein shuttles into the cytoplasm during myocyte differentiation. HDAC5 interacts with many different transcription factors including HDAC3, and may form multi-complex proteins.

Recombinant HDAC5 (656-1123) protein is useful for the study of enzyme kinetics, screening inhibitors, and selectivity profiling.

Recombinant human HDAC5 was expressed in a baculovirus expression system as the full length protein (accession number NP_001015053.1) with an N-terminal FLAG-Tag. The molecular weight of the protein is 124 kDa. The purity of HDAC5 protein is >66% by SDS-PAGE. 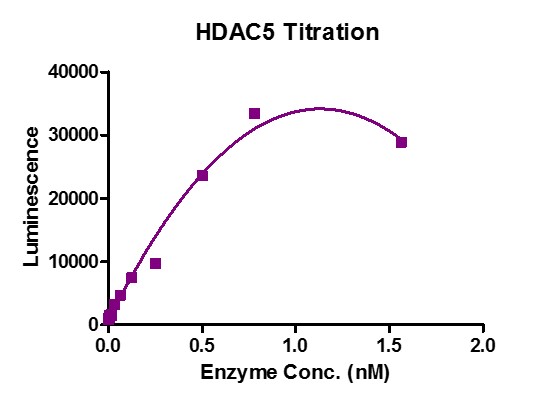 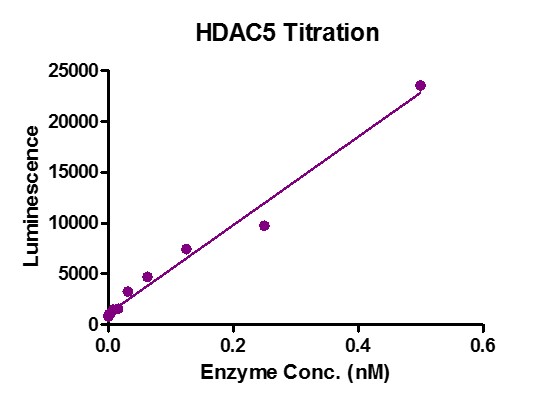 HDAC5 protein was run on an 8% SDS-PAGE gel and stained with Coomassie Blue.
(Click image to enlarge and see details).

Assay was performed using HDAC-Glo Class IIa Assay from Promega. 3.5 µM substrate was incubated with HDAC5 proteins and 1/20,000 developer reagent at room temperature, then luminescence was detected after incubation for 20 min.
(Click image to enlarge and see details).

Assay was performed using HDAC-Glo Class IIa Assay from Promega. 3.5 µM substrate was incubated with HDAC5 proteins and 1/20,000 developer reagent at room temperature, then luminescence was detected after incubation for 20 min.
(Click image to enlarge and see details).